Data shows that Indonesia is a potential market for the music industry. However, government policies to support musicians are still far from optimal.

Latest Datareportal report (2022) shows that Indonesian digital music consumption grew by 20.1% from the previous year, as quoted from Statista. The report also found that 56.7% of Indonesians are using the internet to listen to music, and spend 1 hour and 40 minutes on average per day on music streaming platforms.

Meanwhile, data from McKinsey & Company, as quoted by Katadata, shows that Indonesia was one of the four most potential countries for the music industry in Asia in 2016, along with Thailand, Hong Kong, and Malaysia. This potential is also seen in the financial report of the National Collective Management Agency (LMKN) in 2020. The report found, in 2020, the distribution of performance royalties has reached 72.5%, almost double by 41.7% in the previous year.

However, “The question is, is the market healthy enough for musicians and performing artists? Because Indonesia should not be seen only as a market by industry players,” said Ratri Ninditya, Research Coordinator of the Indonesia Art Coalition (Koalisi Seni), in a discussion “Silently Harmful: The Fate of Musicians in the Digital Era” as part of the Prolog Festival 2022 in Makassar on Saturday, November 12, 2022.

Ratri explained that the LMKN data should be read carefully. Considering the large numbers of digital music consumption in Indonesia, the amount of royalties distributed by the agency to creators is still relatively small.

In Malaysia, the amount of royalties that have been distributed to creators has reached around Rp350 billion – nine times larger than Indonesia. However, the revenue of digital music in Malaysia is only one-tenth of Indonesia. This situation raises the next question, related to the royalty policy, specifically in the Law No. 28 of 2014 on Copyright.

Research by Koalisi Seni this year showed that there is still a lack of information and knowledge about royalties among musicians and performing artworkers. The data recorded that 59.6% of respondents did not know who is responsible for collecting their royalties.

Meanwhile, 77.9% of respondents admitted that they had not joined the LMK. “This is interesting because it potentially proves that many people do not know why it is important for musicians to join the agency,” said Ratri.

The role of LMK is explored in the Copyright Law. One of the rules mandates the LMK to manage song and music royalties in Indonesia. This means that someone can commercially use a song and/or music by paying royalties to the creators, copyright holders, or related rights holders through the LMKN.

Indonesian laws and regulations also state that the LMK and LMKN are entitled to take a total of 20% of the royalties collected as operational funds. The remaining funds will be distributed to the creators, copyright holders, and related rights holders. If some parties are not members of the LMKN, the funds will be announced publicly and stored by the LMKN for two years. If the funds are not claimed during this period, the LMKN will take in the funds.

According to Ratri, musicians and performing artists should have been given the choice to join or not join the LMK to get their royalties. “But by the law, there is no choice,” she said. If LMK membership is mandatory, there should be a provision requiring the LMKN to socialize this regulation to musicians. Unfortunately, if we look at the survey of Koalisi Seni, there are still 36.5% of respondents who do not know the obligation in joining the LMK to collect performance royalties.

To date, Ratri explained, the licensing procedures in the 2014 Copyright Law are mainly regulated through market mechanisms under the phrases “unless agreed otherwise” and “in accordance with fair practices”. The law regulates that licences must be recorded with the Ministry of Law and Human Rights, but the rules do not include standards to assess how far licensing procedure favour the musicians. This is what makes musicians more cautious and careful when making licence agreements.

Ratri believes that the government should support the development of technology for the domestic music industry since Indonesia relies heavily on foreign platforms such as YouTube and Spotify. Ratri also emphasised the importance of musicians and performing artists forming unions to strengthen their bargain with the government and industry. Furthermore, she recommended drafting of guidelines for contract-making with musicians and performing artists. Finally, she highlighted the importance of making copyright laws more widely known. 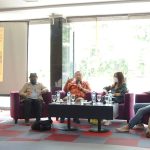 Art Galleries are Expected to Play a Role in Valuing Artwork as a Loan CollateralAdvocacy, Press Release, Publication
X