It has been two decades since the fall of the New Order. Yet, Indonesia’s arts ecosystem still struggles to be free, as it was known – besides of press freedom – as a reflection of democracy and human rights protection.

The lack of appreciation and arts repression became a challenge for Noviati Maulida Rahmah (Aceh) and Haryudi Rahman (Bone) – both of them are members of Indonesian Arts Coalition (Koalisi Seni) – in doing cultural works. Amidst of those limitations, what are their strategies in pursuing the freedom of arts in their regions?

Aceh is known for its Islamic sharia which controls public life. From whip punishment, to prohibition of wearing revealing clothes are made aware through the media. Furthermore, sharia also controls the arts ecosystem. A Literature Study on Freedom of Arts 2010-2020 by Koalisi Seni – based on the data by SAFEnet and YLBHI – shows that 5 of 45 freedom of arts’ violations occurred in Aceh. It starts with the cinema ban, concert disbandment, to dancing ban for adult women.

Of all the six rights on freedom of arts, the right to participate in cultural life is the most violated one. The violators are none other than the Aceh Regional Authority and local organizations.

However, according to Novi, the reality is not as scary as the media reports. The artists, primarily women, still can do their works even though there are limitations by sharia law in Aceh. For instance, the art events in Aceh are very limited at night. There is also obligation for muslim women to wear hijab and ‘decent’ clothes for non-muslims.

Gender inequality in Aceh also becomes a stumbling block on fulfillments of the right to participate in cultural life. Noviati recalls a meeting when she was undervalued by local officials despite coming as a part of the arts experts’ team. This condition was unfortunate because in fact, compared to men, women are the main pillars of arts management in Aceh.

“I’m accustomed to arts management and the (government) system. As a non-dominant gender, there’s still a few women (in arts), especially in Bireuen Regency, and it’s still considered a taboo,” she said.

Moreover, even when she tries to be involved and influence policies as a regional government partner, she still feels that there is a stigma among officials that the artists only work for money.

“The government is often sceptical when the artists get involved in the system. And gradually, we have proved otherwise. I was entrusted to help the government to formulate regional programs and I used it as an opportunity to include women artists’ roles in regional programs,” said Novi, who is also executive member of The Indonesia National Theatre Association (Penastri).

Amidst all of those limitations, Novi doesn’t cease to advocate women’s involvement in arts and freedom of arts in the province known as “The Terrace of Mecca”. She used her organization, Rangkang Sastra, as a vehicle to involve more women in arts management in Aceh.

“It was tough at first. But it’s getting easy along the way. Nowadays, their voice has been heard and they can spread their wings,” said Novi.

They also have diversity in artists’ gender. Not just women and men, local gender expressions such as Calalay and Calabay also have their freedom in arts.

However, their enthusiasm was hindered by poor arts infrastructure. They often use cafes, museum halls, or sport fields as their stage since Bone doesn’t have a single arts building.

In his opinion, the regional government has failed to fulfill artists’ rights to receive support, distribution lines, or rewards for artworks. Poor governance is also behind the lack of public attention in Bone’s arts – compared to other cities such as Makassar with their progressive and attractive urban arts. Even though this city has reached 700 years in age, Haryudi still sees arts governance in Bone is going nowhere.

To address Bone’s arts problem, Haryudi and other local artists founded Aliansi Seni Budaya Bone (Bone Arts and Culture Alliance) with their own funds and facilities for the development of arts in the city. They also worked together to support each other’s works and held a discussion on the implementation of The Law on Advancement of Culture.

“Bone has a long-standing cultural history. Unfortunately, the government seems confused about it. They have no certain goals in developing the city’s potential,” said Haryudi.

He hopes the regional government and the artists could collaborate to support the implementation of The Law on Advancement of Culture. Until one day, Bone can have their own arts building as a support for their cultural life. (Dian Putri, translated by Moyang Kasih) 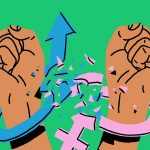 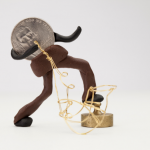