Jakarta – School art show or known as pensi, are merely seen as an informal competition for school prestige. Still, they play a meaningful role in the music ecosystem. Pensi can trigger the audience’s appreciation of music, as well as a showcase of musician’s works and a source of income.

“Pensi is a crucial driver in the music ecosystem. It’s valued because the art show isn’t just about gathering the masses, but it is also the engine of Indonesian music. Not just for the musicians but also the people behind it such as songwriters, sound engineers, arrangers, and so on,” said musician Glenn Fredly in SkulTur, an interactive discussion between three musicians: Glenn Fredly, Monita Tahalea, and Cholil Mahmud, with high school students and teachers at M Bloc Space on Saturday, October 19, 2019.

According to Monita, pensi is part of music appreciation. “Your invitation to the artist in the pensi is a part of music appreciation. However, it would be better if there was more meaning for the audience and the musicians. For example, I have collaborated with a student ensemble on pensi. They arranged the music, then we practised together. Therefore each of us acquired new values and experiences,” he said.

Meanwhile, vocalist of band Efek Rumah Kaca, Cholil Mahmud remembered that pensi is one of his triggers to make music. Starting as a spectator, he followed his passion in making music by forming a band. He too believes, after playing in independent musicians’ own gigs, pensi is the next step to shine. “If you haven’t played in pensi, it means that the band is not liked enough by the youth,” he joked. “Pensi is also a management training for the organising students. They can learn about the process and teamwork.”

In this discussion, Glenn asked students from SMA Labschool Kebayoran about their expertise in attracting sponsors. The students concluded, in persuading potential sponsors, a well-done concept, perseverance, and shrewdness are the keys.

“The concept of the event in the proposal must be well-prepared, including clear benefits for sponsors. We are doing research about what sponsors usually want. Rejection is normal, which actually spurs us to try harder. We have been rejected twice by potential sponsors. Then we modify the proposal and submit it again. After that some company called us for a presentation and we finally got the sponsorship,” said Ghiffari Zafran, a student of SMA Labschool Kebayoran.

Patricia Cecilia, student from the Perguruan Cikini Music Vocational School, said the discussion was very interesting and useful for the students. “We can know how other schools prepare pensi. We are hoping for more collaboration and exchange of ideas with other schools,” he said after the jam session on the M Bloc Live House stage.

Glenn hoped that the pensi could move further to become a movement with wider impact. “For example, the school could work together to help raise funds for other schools that have not been able to hold a pensi. Transfer knowledge is also a potential thing to do between schools. The process must be fun, and there are certainly many musicians who are willing to support it,” he said. 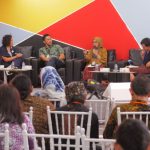 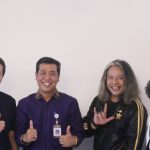